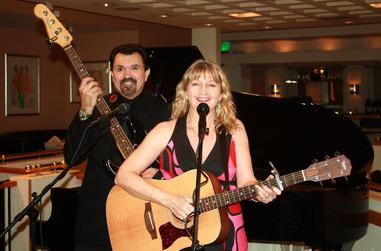 ​Their enjoyment of performing together is contagious, drawing in listeners of all musical tastes. Bogart and Boyd are equally at ease performing sophisticated selections from the Great American Songbook or rocking out with a variety of classic oldies, contemporary pop, R&B, and country tunes. Betsy is fluent in French (she holds a PhD from UCLA and resided in Paris for two years) and she sings many French Pop Classics as well as songs in Spanish, Italian, and German!

Betsy is a classically-trained pianist/vocalist/guitarist who has performed in top spots from coast to coast in the U.S. She has also entertained at world-class venues in France, Switzerland, Germany, and Norway. She delighted international audiences on Royal Caribbean and Celebrity Cruise Lines.  A recording artist, she has written songs for major publishing companies and won the Grand Prize in both the Music City and American Song Festivals.

Canadian-born Wayne is also a classically-trained musician. He performed extensively across British Columbia and around the world on cruise ships. He was a member of Five Man Cargo, a popular rock band who toured with the super-group Bachman Turner Overdrive.  Also a music educator, some of Wayne's students have gone on to perform with prominent pop artists such as Sarah McLaughlin.

In 2007, Betsy and Wayne met while performing in different venues aboard a Royal Caribbean ship. The couple married on Christmas Eve in 2008 and have since become a sought after musical duo. After their great success entertaining audiences around the world, they now perform at Los Angeles and Orange County clubs, lounges, and private events.

When Betsy and Wayne perform, audiences are immediately captivated by the talent, good looks, and sparkling personalities of these two delightful artists! Betsy’s vocal style brings out the best in classic tunes from Stevie Nicks to Carole King, Diana Krall, and more. Wayne’s vocals range from classic 50s rock to country favorites, and his playing infuses their arrangements with energy and drive.